After devastation … the recovery

An amazing bounce-back after catastrophe gives us insights into how the world recovered from the Flood.

by Keith Swenson and David Catchpoole

When Mount St Helens erupted on 18 May 1980, the resulting devastation of the area around the volcano left many stunned at the sheer scale of the destruction. More than 200 square miles (over 500 square km) of what had been a vast green blanket of pristine forest, clear mountain streams and tranquil lakes was now a monotonous grey ash-covered wasteland of fallen timber, steaming pumice plains, barren mudflows and avalanche debris. Shortly after the eruption, the then U.S. President Jimmy Carter compared it to a moonscape. Scientists studying the affected area referred to an ‘apparently sterile landscape’,1 lamenting that ‘It will never be again, in our lifetime’2 and speculating that it would even be ‘impossible for insects to recover at all.’3

Nicknamed the ‘stonewind’, the rock-laden, ground-hugging steam blast advanced rapidly outward from the volcano, flattening over 200 square miles of forest in less than ten minutes.

Scientists who flocked to study the devastated area soon found that the initial pessimistic forecasts of long-term barrenness were largely unfounded.4 For example, within just three years, 90% of the original plant species were found to be growing within the blast zone.5 As is evident from the ‘before-and-after’ photographs on these pages (more photographs were originally included with this article), the innate resilience of the creation had been greatly underestimated.

However, many species were completely eliminated from the Mount St Helens blast zone because of the eruption. While most volcanoes erupt in an upward fashion, Mount St Helens initially exploded sideways, spewing its oven-hot blast over the forested landscape to the north. Nicknamed the ‘stonewind’, the rock-laden, ground-hugging steam blast advanced rapidly outward from the volcano in a 180° arc, flattening over 200 square miles (500 square km) of forest in less than ten minutes. The extent of biological destruction was staggering. The timber felled by the eruption would have been sufficient to build almost 500,000 three-bedroom houses. Virtually all the visible mosses, ferns, shrubs and wildflowers vanished. Not only did all living organisms in the upper North Fork Toutle River die, but 15 miles (24km) of the river itself was no more!6 The estimates of animal deaths by the Washington State Department of Game included 11 million fish; 1 million birds (including 27,000 grouse); 11,000 hares; 5,000 deer; 1,500 elk; 1,400 coyotes; 300 bobcats; 200 black bears; 15 mountain goats;7 and 15 cougars.8 In addition, 57 people were counted as dead or missing.

Virtually all species of medium-to-large sized mammals in the affected area,9 and presumably all bird species,10 were obliterated. But many have come back, by immigrating from outside. Various bird species were recorded in the area soon after the eruption, probably feeding on insects (the first helicopter crews to land in the devastated area reported that flies and other conspicuous insects had preceded them).11,12 Although not all of these insect migrants survived (herbivorous insects could not live until plants had started to grow again), many species did survive—often by consuming their airfall companions, both alive and dead. Among the aerial arrivals were millions of wind-borne spiders,13 plant seeds and fungus spores.

Mt St Helens has forced ecologists to rethink their theories of ecological ‘succession’, as both ‘pioneer’ and ‘climax’ species were found growing side-by-side!

Once vegetation had begun to regrow, the large herbivorous mammals such as elk and deer re-entered the blast zone. Elk, being highly mobile, were able to move into and out of the blast zone at will, and this further hastened plant recovery, as their dung contained seeds and nutrients transported from outside the devastated area. Beavers from the adjacent forests followed water courses upstream to blast zone lakes. Amazingly, salmon and trout maturing in the Pacific Ocean at the time of the eruption (and thought to be intolerant of anything other than cold, clear, well-oxygenated streams), successfully ascended muddy and ash-clogged waterways in their instinctive urge to spawn.14

Although millions of organisms living above ground at the time of the eruption were wiped out, many life-forms within the devastated area survived the fury of the blast.15 How? Ants survived in underground colonies,16 salamanders in the soft wood of decomposing logs, fish in ice-covered lakes, and roots of plants were protected from the blast inferno by soil and snowpack. Although large numbers of these subsequently succumbed to the unforgiving post-eruption environment, some lived on and reproduced. In fact, ecologists acknowledge that the presence of such ‘unexpected survivors’ greatly accelerated recovery. The aquatic and streambank areas exhibited the most rapid recovery. At least 10 of the 16 original species of amphibians (frogs, toads and salamanders) survived the eruption.17 Frog and toad survivors exploded onto the recovering landscape, rapidly establishing large breeding populations by the mid-1980s.

Today, the diversity of species (e.g. birds18) living in the area devastated by the eruption of Mount St Helens in May 1980 is approaching its pre-eruption levels. The kinds of birds and animals that have not yet returned are mostly species preferring old-growth forest habitat. While it will probably take at least 200 years before old-growth forest again occupies the blast zone (providing another disturbance does not intervene), Mount St Helens has forced ecologists to rethink their theories of ecological ‘succession’. This was because they found both ‘pioneer’ and ‘climax’ species growing side-by-side!

Observing the return of life to Mount St Helens can provide some insight into the return of life to the world after Noah’s Flood. Both Mount St Helens and the world-wide Flood were cataclysmic geologic events involving extreme volcanism (Genesis 7:11), flooding, and the destruction of life—one on a local, the other on a global scale. In both, organisms survived and repopulated the post-disturbance landscape. Consider:

Resilience of the creation

The overarching conclusion to be drawn from Mount St Helens is the extreme resilience of the creation. Sceptics often argue that recovery from a global catastrophe such as the Flood would be impossible within a short biblical time-frame. Mount St Helens, however, demonstrates how quickly and completely recovery can occur in the natural world. So, following the Flood of Noah’s day, the regreening and repopulating of the earth could also have happened within a very short time-frame. Just like the Bible says. 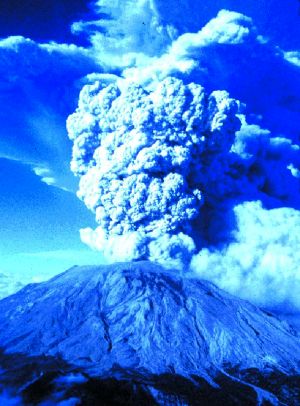 The death and rebirth of Spirit Lake

On the morning of May 18, 1980, Spirit Lake, a paragon of tranquility and beauty, was virtually obliterated. About one-third of the avalanche of debris ploughed directly into this azure jewel, causing its water to slosh over 240 metres (800 feet) up the mountain slopes to the north, where it picked up the soil and vegetation of an old-growth forest, including a million logs. When this organic soup returned, it was to a new lake basin, elevated over 60 metres (more than 200 feet) above its pre-eruption level. Oven-hot flows of volcanic debris boiled into the lake’s south shore, and volcanic rocks and ash rained from the sky. The first helicopter crews into the blast zone reported they were unable to find Spirit Lake. They did not recognise it with its surface obscured by a mantle of floating logs and pumice.

When scientists returned to Spirit Lake in June of 1980, they found it had been ‘transformed into a roiling [‘roil’ = to stir, to make muddy], steaming body of degraded water choked with logs and mud.’1 They predicted it would take 10–20 years to return to its ‘pre-eruption chemical and biological condition.’ As it turned out, it took closer to five! How did this happen so quickly?

After the eruption, Spirit Lake became a ‘paradise’ for microbes. Its waters, once cold (10°C = 50°F) and clear, became warm (over 32°C = 90°F) and muddy, laden with organic debris, mineral nutrients and other chemicals. Bacteria proliferated to an astounding degree in this broth, ultimately peaking at half a billion bacterial cells per millilitre—a ‘concentration that is possibly unprecedented in the annals of environmental microbiology.’2 For a time, the oxygen levels were so depleted by the decomposition activity that the lake could support only anaerobic (i.e. can live without oxygen) microbes. Spirit Lake thus bubbled like a cauldron from escaping carbon dioxide, methane and hydrogen sulfide generated by these bacteria in bottom sediments. For scientists visiting the area, the odour was overwhelming! However, the ‘no oxygen’ bacteria were crucial in decomposing the huge amounts of organic debris settling on the bottom of the lake during this phase of the recovery process.

Restoration was greatly hastened by the coming of the winter rains. This seasonal influx of fresh water diluted the concentration of toxic chemicals and raised oxygen levels. Wind, waves and seasonal lake turnover stirred in still more oxygen, enabling the return of oxygen-dependent microbes, which absorbed mineral nutrients from the water, and thus helped clear the lake of these and other chemicals. Water clarity improved, and with increased light penetration the phytoplankton reappeared. They produce food by photosynthesis and release oxygen as a by-product. Within just five years, the water quality had nearly returned to its pristine pre-eruption state—a remarkable transformation.