Why do atheists hate God?

Recently, I have had a lot of conversations with atheists. Many express a strong hatred of God. I have been at a loss to explain this. How can you hate someone you don’t believe in? Why the hostility? If God does not exist, shouldn’t atheists just relax and seek a good time before they become plant food? Why should it matter if people believe in God? Nothing matters if atheism is true.

Aldous Huxley (1894–1963), the brother of the atheistic evolutionist Sir Julian Huxley, advocated a drug-fuelled utopia. He gave the reason for his anti-Christian stance:

If God does not exist, shouldn’t atheists just relax and seek a good time before they become plant food? Why should it matter if people believe in God?

“I had motive for not wanting the world to have a meaning … the philosophy of meaninglessness was essentially an instrument of liberation, sexual and political.”1

What about atheists who had a church/religious upbringing? Some of them hate God because of evil things done to them by teachers in religious schools or by church leaders—people who on the face of it represented God. Antipathy towards God is an understandable reaction, sadly (although illogical).

Some atheists complain of Christian ‘intolerance’ in speaking about hell. But if those who spurn God’s forgiveness will suffer God’s wrath, as the Bible teaches, shouldn’t we Christians be warning everyone about the danger and how they can be saved? How is that ‘intolerant’?

Many complain about hell; they are angry at God because of hell. I understand that teachers in certain church-based schools, and parents in some ‘religious’ homes, commonly used the ‘fear of God’ to make children behave. “You are bad; you will burn in hell if you don’t behave.” But such a simplistic works-oriented approach not only trivializes this most serious of subjects, it negates the Gospel of God’s grace. (We are all ‘bad’ in God’s eyes, and ‘behaving properly’ will not save us—only Jesus can.)

A child who is having difficulties may well conclude that there is no way out for them, leading to years of nightmares about suffering in hell. Such a troubled teenager hearing an atheist say that evolution explains how we got here and that God is a myth2 could find this to be a liberating message, a release from their fears.


Keep your family informed on the latest easy-to-understand evidences for creation and against evolution! This unique full-color family magazine gives God the glory, refutes evolution, and gives you the answers to defend your faith. Exciting articles and great witnessing material you won’t find anywhere else! Includes a beautifully illustrated full-color children’s section in every issue. Delivered to your home every three months! Subscribe now!

The Gospel (good news, see p. 41) is missing from all this. The Bible tells us that God is in the business of salvation. Though His wrath regarding sin is all too real (as seen in the Fall and Flood judgments; pp. 12–14, p. 15), we need not suffer it. Those who come to Him in repentance and faith will not be turned away (John 6:37). See also pp. 32–34.

“For God so loved the world that He gave His only-begotten Son, that whoever believes in Him should not perish but have everlasting life.” (John 3:16)

It is strange that people hate God, who loves so much.

Some atheists complain of Christian ‘intolerance’ in speaking about hell. But if those who spurn God’s forgiveness will suffer God’s wrath, shouldn’t we Christians be warning everyone about the danger and how they can be saved? How is that ‘intolerant’? It would be extremely unloving not to tell others of this. A gift of Creation magazine might be a good place to start. 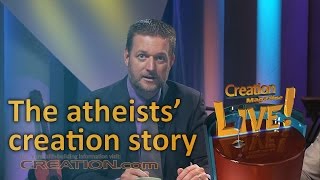