Clergymen betraying the faith they profess is not new. But perhaps none was as destructive as the famous author who smoothed the way for Darwin.

Quisling: a person who aids the enemy, a traitor (after Vidkun Quisling (1887–1945), Norwegian army officer and politician who collaborated with the Nazis occupying his country during WWII).

The first edition of 1,250 copies of Charles Darwin’s On the Origin of Species was published on 24 November 1859. The book caused something of a public uproar and was promptly denounced from pulpits across England, despite the popular story that the entire first edition was bought by an eager public on the day of publication.1

This ecclesiastical hostility to an idea that blatantly opposed the Creation account in Genesis was not altogether unexpected by Darwin and his ‘managers’, Charles Lyell and Joseph Hooker. So they eagerly sought a prominent clergyman who knew something of science to promote their cause. They found one in the Rev. Charles Kingsley. Kingsley was an amateur naturalist who had been ordained as an Anglican curate in 1842, and two years later as a priest. He was a founding member of the Christian Socialist movement; he was becoming known as a writer of novels that promoted the cause of the poor, and even better known for his historical novels, e.g. Hypatia (1853) and Westward Ho (1855). In 1859, he was appointed Chaplain to Queen Victoria.

Darwin sent Kingsley a copy of the first edition of his Origin. Kingsley, in his letter of thanks, was fulsome in his praise. ‘All I have seen of it awes me,’ he wrote, ‘both from the heap of facts and the prestige of your name, and also with the clear intuition, that if you be right, I must give up much that I have believed and written.’2 This apparently posed no problem to him, for he went on to say that he was now free from the ‘superstition’ that God needed a fresh act of creation for each type of creature.

Darwin was so delighted at receiving this endorsement from an Anglican prelate that he hastily added part of Kingsley’s letter to the last chapter of the second edition of the Origin, published just two months later, as follows:

‘A celebrated author and divine has written to me that “he has gradually learnt to see that it is just as noble a conception of the Deity to believe that He created a few original forms capable of self-development into other and needful forms, as to believe that He required a fresh act of creation to supply the voids caused by the action of His laws.”’3

This was a tactical move; Darwin was not so inconsistent as to hold to theistic evolution.4,5 One critic, on reading Darwin’s anonymous quote from Kingsley in the Origin, could hardly believe that any clergyman could have ‘penned lines so fatal to the truths he is called upon to teach’,6 and he challenged Darwin to name the author. Darwin declined, but undoubtedly this clerical endorsement helped overcome opposition from other church leaders.

This desire for anonymity did not last long. In 1863, Kingsley wrote The Water Babies, a curious children’s book in which there are various allusions to evolution, e.g. Tom (a human child who has become an amphibian with gills and now lives in the water) approaches Mother Carey, a synonym for Mother Nature, and says, ‘I heard, ma’am, that you were always busy making new beasts out of old.’ She replies, ‘I am not going to trouble myself to make things … I sit here and make them make themselves.’7 In another chapter, there is a tongue-in-cheek story about a race of men whose generations gradually change into apes. Kingsley has the fairy say: ‘Folks say now that I can make beasts into men, by circumstance, and selection, and competition, and so forth … if I can turn beasts into men, I can, by the same laws of circumstance, and selection, and competition, turn men into beasts.’8

Kingsley was eager to side with the proponents of evolution. He corresponded with Darwin and Lyell, and pursued a friendship with Thomas Huxley, the anti-Christian British biologist known as ‘Darwin’s bulldog’. Huxley wrote to a friend concerning Kingsley, as follows: ‘He is an excellent Darwinian to begin with, and told me a capital story of his reply to Lady Aylesbury who expressed her astonishment at his favouring such a heresy—“What can be more delightful to me Lady Aylesbury, than to know that your Ladyship & myself sprang from the same toad stool.” Whereby the frivolous old woman shut up, in doubt whether she was being chaffed or adored for her remark.’9

In 1867, Kingsley publicly declared his belief that man was descended from apes and that the world was millions of years old, in two lectures entitled ‘Science and Scripture’ given at the Royal Institution, and printed in Frasers Magazine, June and July 1867.10

It is not surprising that Kingsley’s rejection of the account of creation in Genesis and his acceptance of the theory of evolution in its place led him to espouse racist views. If people groups had evolved their various characteristics during long periods of isolation, one could now view some as being less evolved, and thus less human, than others. In a book of sermons, Kingsley wrote: ‘The Black People of Australia, exactly the same race as the African Negro, cannot take in the Gospel … All attempts to bring them to a knowledge of the true God have as yet failed utterly … Poor brutes in human shape … they must perish off the face of the earth like brute beasts.’11,12

John G. Paton (1824–1897), known as ‘the Missionary to the New Hebrides’, was greatly distressed when he read this sermon. In his autobiography, he responded by narrating the story of Nora, an Australian Aboriginal Christian woman whom he knew, ‘as if to shatter to pieces everything that the famous preacher had proclaimed’. Paton wrote:

‘… she lay sick on the ground within a miserable hut. The visitors found her reading a Bible, and explaining to a number of her own poor people the wonders of redeeming love. My friend, Roderick Urquhart, Esq., overcome by the sight, said, “Nora, I am grieved to see you here, and deprived of every comfort in your sickness.” She answered, not without tears, “The change has indeed made me unwell; but I am beginning to think that this too is for the best; it has at last brought my poor husband [who was addicted to drink] to his senses, and I will grudge nothing if God thereby brings him to the Saviour’s feet.”’12

Paton goes on to recount:

‘what the Gospel has done for the near kindred of these same Aboriginals. On our own Aneityum 3,500 Cannibals have been led to renounce their heathenism, and are leading a civilized and a Christian life … In Samoa, 34,000 Cannibals have professed Christianity … On our New Hebrides, more than 12,000 Cannibals have been brought to sit at the feet of Christ, though I mean not to say that they are all model Christians; and 133 of the Natives have been trained and sent forth as teachers and preachers of the Gospel. Had Christ been brought in the same way into the heart and life of the Aborigines by the Christians of Australia and of Britain—equally blessed results would as surely have followed, for He is the same yesterday, to-day, and for ever.’12

Kingsley was wrong on all counts concerning the Australian Aborigines, as well as in his rejection of Genesis creation in favour of Darwinism. His collaboration with Darwin and Huxley helped them in their task of undermining the faith of multitudes concerning the accuracy and authority of the Word of God. He thus deserves the somewhat anachronistic appellation that forms the title of this article.

For his support of the Darwinists, Kingsley was elected a Fellow of the Geological Society in 1863, seconded by Charles Lyell. He was made Canon of Westminster Abbey in 1873 and, after his death in 1875, a marble bust was placed on a window sill there, a short distance from where Darwin was interred in 1882. How ironic that two men whose writings have helped undermine the Genesis foundation of the Christian faith are thus honoured in one of the most famous churches in the world! 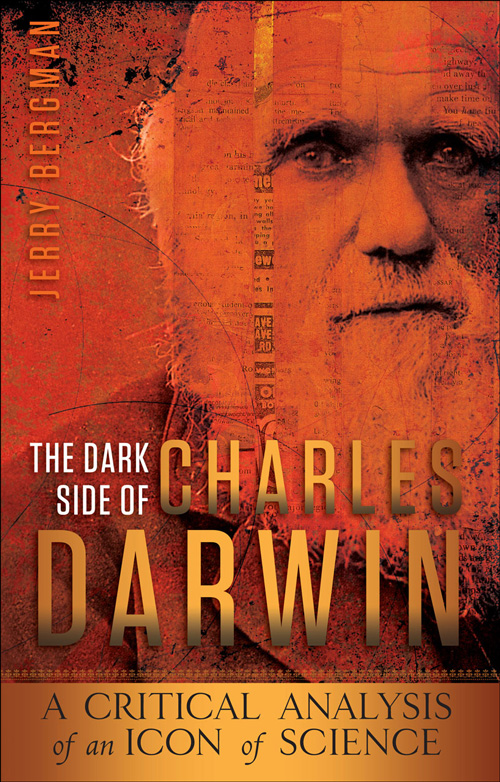 Dark Side of Charles Darwin
by Jerry Bergman
£ 11.00
Soft Cover