Germ’s miniature motor has a clutch

Many bacteria are powered by real electrical outboard motors, only 45 nm in diameter.1 These motors connect to long, thin, whip-like helical filaments several times as long as the germ, via a universal joint. This converts the rotary motion of the motor into wavelike motions in the filament. The motor comprises a stator, rotor, drive shaft and bushing that guides the driveshaft out through the cell wall. ‘The assemblage of motor and filament is called a flagellum.’1 Bacteria often have several flagella, and their concerted motion enables the cell to swim at 35 cell lengths per second.1

While our electrical motors are powered by a negatively charged current (electron flow in wires), the flagellar motor is powered by positively charged current. This is a flow of hydrogen ions (protons, H+), from the outside to the inside of the cell (except for marine bacteria and bacteria that live in very alkaline conditions (i.e. low concentration of H+), where sodium ions are used instead). The proton movement is driven by either an electrical or pH gradient, and the energy to generate this gradient comes from the oxidation of its food. The proton flow changes the shape of one of the stator proteins, which exerts a force on one of the rotor proteins, thereby driving the rotor.1 A recent article said:

‘The flagellum is one of nature’s smallest and most powerful motors—ones like those produced by B. subtilis can rotate more than 200 times per second, driven by 1,400 piconewton-nanometers of torque. That’s quite a bit of (miniature) horsepower for a machine whose width stretches only a few dozen nanometers.’2

This same article reported on another astounding discovery: that this motor even has a clutch to disconnect the motor from the filament. Scientists from Indiana University Bloomington (IU) and Harvard University actually discovered this by accident when researching biofilms.3

Bacterial flagellum with rotary motor, with the following features 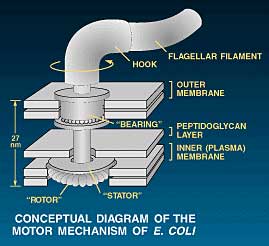 [from Bacterial Flagella: Paradigm for Design, video, <www.arn.org/arnproducts/videos/v021.htm>, and the update in this article for the last one]

These are slimy sheets a fraction of a millimetre thick that form on any surface that has a supply of nutrients and water, including teeth and pipes.4

‘We were trying to get at how the bacterium’s ability to move and biofilm formation are balanced. We were looking for the genes that affected whether the cells are mobile or stationary. Although B. subtilis is harmless, biofilms are often associated with infections by pathogenic bacteria. Understanding biofilm formation may eventually prove useful in combating bacterial infections.’2,5

That is, the fast and furious motions of the bacteria might disrupt the formation of biofilms, so the bacteria need some means of stopping it quickly. The researchers discovered that a protein called EpsE was responsible somehow. But how did it work? There were two possibilities: One possibility is a brake, locking up the motor so preventing it spinning; another is simply to disconnect the motor from the filament, just as a clutch in a car disconnects the drive wheels from the engine.

To decide between these options, the researchers attached the filaments to a glass slide, and observed the bacterium. The flagellar motor was powerful enough to turn the entire germ once every five seconds, without EpsE. If EpsE were a brake, then the bacterium would also be unable to turn, like the wheels on a braked car; if it were a clutch, then the bacteria would be free to rotate if powered by another source, like the wheels of a car coasting down a hill on ‘neutral’, powered by gravity. It turned out that the bacteria with the protein present could indeed rotate passively, powered by the random collisions of molecules (Brownian motion6). In other words the filament freewheels.

This molecular clutch, EpsE, is thought to dock on the flagellum’s rotor, a donut-shaped structure at the base of the flagellum. There, EpsE interacts with one of the rotor proteins, called FliG, which changes the rotor’s shape so that it disengages from the engine. Or as described in the perspective:

‘Motile cells are powered by interaction of the FliG protein with the MotA/B complex (which generates torque). The protein EpsE acts as a molecular clutch to disengage the rotary flagellar motor, leaving the flagellum intact but unpowered. This shuts down motility and facilitates biofilm formation.’4

This clutch mechanism is very efficient: it means that the germ needs to make only one protein to halt the powered filament motion, and this takes only 15 minutes. It also preserves the motor intact, so it could reactivate if necessary, rather than needing to be rebuilt from scratch. There also may be an advantage to building biofilms if the filaments were free to rotate in neutral rather than stopped rigidly.4

While human engineers solved the problem: ‘How do you temporarily stop a motor once it gets going?’ The Designer of the bacterial flagellum had anticipated that solution with a clutch.

‘We think it’s pretty cool that evolving bacteria and human engineers arrived at a similar solution to the same problem: How do you temporarily stop a motor once it gets going?’2

It would make more sense to say:

‘We think it’s pretty cool that human engineers solved the problem: “How do you temporarily stop a motor once it gets going?” with a clutch, while the Designer of the bacterial flagellum had anticipated that solution.’ 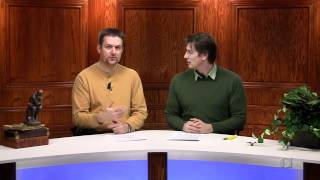