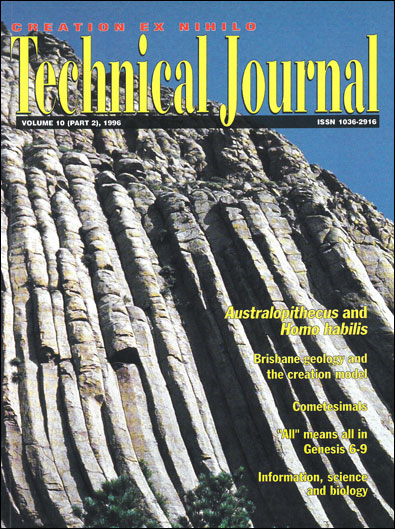 Today, the various species of Anolis lizard on Puerto Rico include ones small enough to forage for insects at the ends of branches, also a greenish variety better able to hide in the leaves, and a brownish version well camouflaged on tree trunks and the ground. Just as for Darwin’s finches, it can reasonably be inferred (and creationists could agree) that all the present-day species descended from an original species (possibly only one pair) invading the island.

It is not difficult to conceive how such specialization occurred, with the lizards adapting via selection acting only on the genetic information present in the original population. The originally less-specialized ‘ancestor’ Anolis lizard was most likely medium-sized and able to forage for insects both on the trees and on the ground, with the information for both green and brown colouring already present in varying degrees.

The splitting off of such daughter populations, each with less information (as a whole population, not necessarily as individuals), does not involve any ‘evolution’ in the sense of new genetic information arising. For a smaller number of kinds on the Ark to have given rise to the more numerous descendant species of today, processes like this would have had to be operative on a substantial scale.

It becomes very interesting when one discovers that exactly the same pattern as on Puerto Rico is found for lizards of the Anolis genus on the island of Jamaica. This presents a prima facie problem for current evolutionary theory; how can evolution, if it is a largely unguided lottery depending on chance mutations, take exactly the same paths independently? The two islands ‘ … have important differences in their plants, predators and climate’.1 Even if the selection pressures were identical, it would still require the same mutations to arise by chance over large stretches of time. Could they have evolved in one place and then independently migrated as separate populations to the other? Work on mitochondrial DNA by Jonathan Losos of Washington University in St Louis, Missouri, suggests that this was not so—the ancestor Anolis species was somewhat different for each island (perhaps the consequence of prior speciation in the creationist view).

However if, as the creationist assumes, the genetic potential for at least most of such adaptive change was already present by design, it is no surprise to find the same sorts of changes. For example, if the ancestral lizard species had the information enabling both green and brown colouration, then whatever the other ecological pressures might be (so long as there were trees), it would not be unlikely for both green and brown daughter species to arise. Similar arguments would obtain for all the other parameters.

The Anolis lizards of Puerto Rico and Jamaica therefore are more consistent with the creationist/pre-adaptationist viewpoint. Commenting on this situation, Oxford zoologist Paul Harvey is reported as telling the prestigious British Association recently that ‘Lizards don’t seem to respect evolutionary theory … ’.2