So Jesus said to the Jews who had believed him, “If you abide in my word, you are truly my disciples, and you will know the truth, and the truth will set you free.” John 8:31–32

As a Christian and a science student at university I tried to believe both evolution and the Bible. I subscribed to the tests of evangelical orthodoxy, such as the inerrancy of the Bible—or I thought I did. I would trot out popular ‘explanations’ of the time about how they could go together: the days are long periods of time, or ‘God used evolution’, etc. The currently fashionable ‘disconnect’ approach, that Genesis was a ‘different genre of literature’ that said nothing about real events in space and time, had not gained any traction at that time. However, deep down I knew that there was something seriously wrong with my position.

The last pillar of my evolutionary thinking to fall was my naïve acceptance of ‘deep time’.

Then I heard the leading creationist biochemist and debater Dr Duane Gish (1921–2013) speak at a lunchtime meeting at the university. It was the first time I had heard any man of science stand up for believing the Bible in a straightforward manner in Genesis. That impressed me. He recommended a book about Noah’s Flood, which I bought (it was expensive on a student’s income). Reading that book changed my approach to the Bible, which changed my life, but it did not happen overnight. It took about two years for the message to fully sink in. The last pillar of my evolutionary thinking to fall was my naïve acceptance of ‘deep time’. Then I finally realized that I now did believe the Bible and I did really believe it as God’s inerrant Word and that henceforth I would strive to let it rule my thinking.

And I felt liberated! It reminds me of what Jesus said to the Jews who had believed in him, “If you abide in my word, you are truly my disciples, and you will know the truth, and the truth will set you free.” (John 8:31–32)

Yes, liberated! I no longer believed in a God who was limited by my puny imagination (‘How could God create the universe in a few days?’) but in God who is all-powerful. This change in me was almost like being born again, again!

There is now such a strong case for the Bible’s history; it’s much stronger than when I was freed from the evolutionary shackles.

Many people in our churches need liberating like that, and so we produce Creation magazine to help with this process. And we receive lots of testimonies along similar lines to mine. The author of the article on man as the pinnacle of creation (p. 52) once thought like I did, but was liberated.

There is now such a strong case for the Bible’s history; it’s much stronger than when I was freed from the evolutionary shackles. You will find some of this wealth of evidence in this issue: some marvelous examples of divine design in diatoms (p. 12), the incredible motors that unwind DNA (p. 24), the amazing features of whales, and the astonishing characteristics of humans (p. 52), the eye-catching eye spots of the peacock’s tail (back cover), and much more.

Then there are the personal stories of a scientist who researched the astounding human immune system (p. 40), the captain of The Beagle that carried Darwin around the world (p. 14), and the tragic story of a young lady who suffered because of social Darwinism (p. 50).

And then there are articles on geology (p. 44), astronomy (p. 22, p. 38), and biology (p. 48) that point to creation not long ago, a lack of evolution, and the global Flood of Noah as explaining the surface features of the earth.

I trust that you will enjoy this issue, and share it with someone else; you might be the means of their liberation!

Things to think about as a theistic evolutionist 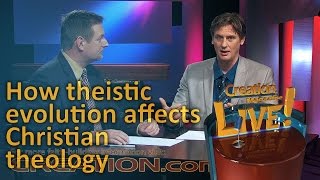 Exploring the World of Biology
by John Hudson Tiner
US $15.00
Soft Cover