A crisis at California’s Oroville Dam in early 2017 dramatically demonstrated the incredible power of flowing water. The 235-m (770-ft) dam (figure 1) is a 250 km (160 mile) drive north-east of San Francisco in the foothills of the Sierra Nevada. It’s the tallest dam in the US.

In February 2017, heavy rainfall in the Feather River catchment raised the water level of Lake Oroville, and operators began a routine release of water down the main spillway. As they increased the flow, even though it was well below its maximum capacity, an unusual flow pattern developed.1 On shutting off the water, they discovered the water had ripped large slabs of concrete from the spillway and eroded the underlying rock. The crater extended almost the full width of the spillway (figure 2).

The canyon was eroded in just 18 days, with the flow in the spillway being less than half the normal spillway capacity for most of that time.

Rains persisted and the dam continued to fill. Because of concerns that the auxiliary spillway could fail, operators had no choice but to use the damaged spillway again. The situation was so serious that more than 180,000 people were evacuated at short notice from the valley below the dam.2

As the flow resumed it eroded more concrete and started to gush alongside the spillway down the embankment (figure 3). However, operators continued discharging water for more than two weeks until the lake had reduced to a safe level.3

When they eventually shut off the flow, the immensity of the erosion was astounding (figure 4). Half way down the spillway the water had excavated an enormous plunge pool—140 m (450 ft) wide, 75 m (250 ft) long, and 40 m (130 ft) deep. Beyond that, most of the concrete structure had been washed away.

Alongside the spillway the water had excavated a long, deep canyon into the rock abutment of the main dam. It was 400 m (1,300 ft) long, 120 m (400 ft) wide, and up to 50 m (160 ft) feet deep (figure 4). Except for a few enormous chunks of rock, the canyon was swept clean of debris, which is typical of a canyon formed by large water flows. The sides of the canyon were steep, a tell-tale sign of being eroded recently.

As seen in figure 5, the Oroville Dam spillway sits on red-orange weathered material, which is easily eroded. Beneath that is a hard, resistant, fresh, grey-blue, metamorphic rock, called amphibolite.4 It has repeating north-south fractures called foliation (Latin folium, leaf), similar to a book with its pages sitting almost vertically. This rock was originally of undersea volcanic origin but metamorphosed when the Sierra Nevada was uplifted about halfway through Noah’s Flood. This rock is hard and erosion resistant.

Eroded rock debris was washed into a debris pile in the river channel at the bottom of the spillway (figure 4). The material, with an estimated volume of about 1.3 million cubic metres (1.7 million cubic yards), restricted the channel and prevented the hydro power plant from operating. The rock was so hard that, when excavators were scooping up large boulders to load onto trucks, it would create sparks. The rocks were still angular in shape because they had not been transported far enough to round their sharp edges. The water had carried a large volume of finer material downstream.

The massive canyon eroded by water released from Oroville Dam demonstrates how quickly hard rock can be eroded by flowing water. That the canyon was eroded in just 18 days demonstrates that geological processes occur rapidly when the water flows are large. The highest discharge rate was maintained for just four days. Although the flow down the spillway was alarming in its ferocity, it was many thousands of times smaller than the water flows unleashed on the earth during Noah’s Flood. The Oroville Dam crisis gives a tiny glimpse into the sorts of forces at work during the global Flood, which produced continental scale sedimentary deposits and vast canyons quickly when the enormous cataclysm engulfed the earth.

Uniformitarianism and the age of the earth

Footprints in the Ash
by John Morris, Steven A Austin
US $17.00
Hard Cover 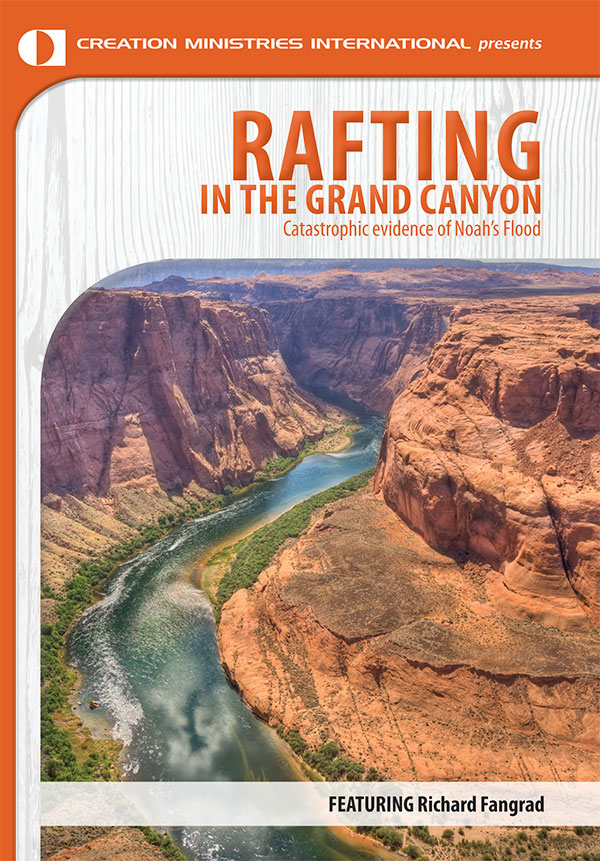