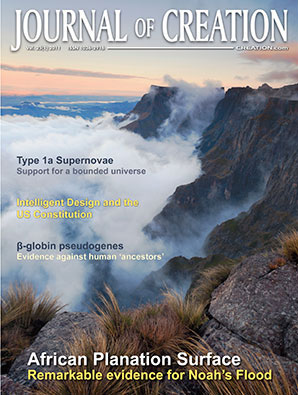 Some bugs do grow bigger with higher oxygen

Most modern creation organisations, CMI among them, are aware of the substantial problems, both biblical and scientific, with the ‘pre-Flood vapour canopy’ model.1

The idea was that since insects had no lungs, but breathed passively through tubes (tracheae) leading to holes on the outside (spiracles), this limited the size they could reach. Thus, the existence of some very large insects in the fossil record was support for the idea that oxygen partial pressure was higher.

For example, Megaloprepus caerulatus (figure 1), the largest dragonfly species today, has a wingspan of up to 19 cm and its body is over 12 cm long. By contrast, the extinct Meganeura dragonfly found in the fossil record had a wingspan of nearly 90 cm, and its body was up to a metre long.

However, this seemed to crumble when it was discovered that insects don’t breathe passively at all,3 but “pump their air tubes much as humans expand and contract their lungs.”4 This means that a key argument that increased oxygen partial pressure was necessary for large insects is shown to be unsound.

But in an interesting twist, researchers have now shown that raising insects in high levels of oxygen affects their size, though very unevenly.5

Researcher John VandenBrooks of Arizona State University in Tempe raised insects in various levels of atmospheric oxygen. The Science Daily report on this work said: “In all, ten out of twelve kinds of insects studied decreased in size in lower oxygen atmospheres. But there were varied responses when they were placed into an enriched oxygen atmosphere.”2

VandenBrooks and his team found that dragonflies raised in higher levels of oxygen grew faster and became bigger adults, though nothing approaching the fossil size. This is consistent with the idea that the pre-Flood atmosphere had higher levels of oxygen. Cockroaches, on the other hand, actually grew more slowly, and did not become bigger adults in a hyperoxic environment. While that might superficially seem to negate the idea of higher past O2 levels, it is actually consistent with it when one considers that cockroaches in the fossil record did not grow much larger than today. The largest cockroach on Earth today is the giant burrowing cockroach (Macropanesthia rhinoceros; figure 1), which can attain a length of more than 8 cm. The largest fossil cockroach on record is, at nearly 9 cm, only a little longer.

Why the roaches didn’t enlarge

Puzzled by this seemingly contrary situation with cockroaches, the researchers found that the roaches reared in high oxygen reacted by having smaller tracheal tubes. The team theorized that this might allow the insects to “invest more in tissues used for other vital functions other than breathing—like eating or reproducing.”

Also, oxygen is a very reactive molecule, and aerobic creatures must have means of dealing with it. Hence the important role of anti-oxidants. It is therefore not surprising that too high an oxygen level can be toxic. So is not clear that higher oxygen concentration will be beneficial (see also ref. 1).

But in an interesting twist, researchers have now shown that raising insects in high levels of oxygen affects their size, though very unevenly.

What is important to note, however, is that in these experiments, the higher partial pressure of oxygen was achieved not by increasing the total pressure (which is what a canopy might do) but by increasing oxygen concentration [O2].6

Quite appropriately, VandenBrooks suggests that the next step would be to examine the tubes in insects found in amber, as a possible indicator of past oxygen levels.

It certainly seems that this would be much more definitive than trying to judge the pre-Flood atmosphere O2 concentration based on analysis of air bubbles trapped in amber. Amber is unlikely to form a seal impervious to gas molecules, and bubbles add to the pressure in any case. Whereas the tracheal tube comparisons could conceivably tell us about the oxygen content in the atmosphere in which the insect actually grew to maturity.

If such future studies suggest that oxygen levels pre-Flood were higher, this may be because the pre-Flood world carried more oxygen-producing vegetation, possibly due to greater land area and ‘floating forests’, much of it buried during the Flood.7