Preaching the Gospel in today’s society

Today’s society seems to be becoming more and more impervious to the Gospel. So how can we present the Gospel to maximum effect? The book of Acts provides an answer.

It is reasonable for us to consider the book of Acts as having two main purposes that benefit us today. These are:

If we examine Acts in this light—as our example of how we should go about preaching the Gospel in a cross-cultural situation or in our own culture (which is becoming more and more multi-cultural) —we see some surprising things.

The love of God

First, the love of God is not mentioned by any preacher in Acts in any sermon. In fact, as a concordance will show, the word ‘love’ does not occur even once in the book of Acts in any context. Instead, Paul and the other preachers reiterate the themes of the death and resurrection of Jesus, God’s judgment, and the need for personal repentance and belief in Christ. Paul’s expositions on the love of God, including the great theme in Romans 5:8 that God loved us while we were still sinners, were all written to Christians, and were not, it seems, preached to non-Christians.

This does not mean, however, that God’s love cannot be seen in action in Acts.1 Saul’s (Paul’s) conversion, recounted three times for us in Acts (Acts 9:1–20, 22:1–16, 26:9–18), is attributed by Paul in his letter to Timothy as being due to the grace, love, mercy, and longsuffering of God, and Paul says that his conversion was ‘a pattern to them which should hereafter believe on Him’(I Timothy 1:12–16). In Romans 2:4, Paul says that it is the goodness of God that leads to repentance, and the term ‘goodness’ here encompasses not only God’s holiness, righteousness and truth, but also His love, benevolence, mercy and grace.2

The second surprising thing about the way Paul preached the Gospel, as recorded in Acts, is that he had two entirely different starting points, depending on his audience.

Why the difference between Paul’s approach to the Jews and his approach to the non-Jews? The reason is the key to our understanding of why preaching about the lost state of man, or even about the cross, often has little impact in society today, whether in the West or in missionary situations.

Judaism had a creation basis—Genesis. From the Old Testament Scriptures the Jews believed in the one true God and knew Him as Creator, Lawgiver, and Judge. The Jews already knew and believed the scriptural record of Creation and the Fall: they knew about sin and that the penalty for sin is death. They needed only to be shown from the Scriptures and from the Resurrection that Jesus was the promised Messiah.

On the other hand, the Gentiles, and the Greeks in particular, were evolutionary in their thinking. Professor Fairfield Osborn, of Columbia University and the American Museum of Natural History, has said that Empedocles, who lived in the fifth Century BC, ‘may justly be called the father of the evolution idea’.3 Aristotle, 384–322 BC, in his Physics, ‘refers to Empedocles as having first shown the possibility of the origin of the fittest forms of life through chance rather than through Design’.4 And Aristotle himself ‘taught that there was a continuous gradation of living forms from the lowest to the highest, culminating in man, and that this evolutionary sequence came about through an internal perfecting tendency.’5

When Paul was on Mars Hill, he was dealing with ‘certain philosophers of the Epicureans, and of the Stoics’ (Acts 17:18). The Epicureans followed Epicurus (342–270 BC), who denied that there was any purposive form in nature and taught that everything on the earth had evolved directly from the earth material itself. It is not surprising then that the Epicureans believed that pleasure, and particularly sensuous pleasure, was the chief good of existence. The Stoics, on the other hand, stressed a simple life-style, but were completely pantheistic. Thus Greek society was both evolutionary in its thinking and idolatrous in its practice.

These Gentiles did not have the Jewish Scriptures. Paul therefore had to reach them in terms of something they did have—the foundational knowledge of God as Creator, almost obliterated by their philosophies and idolatries, but still there and witnessed to by nature and their consciences (Romans 1:20, 2:15). And so, in his address to the men on Mars Hill (Acts 17:22–31), Paul began with the power of God in creation, and moved onto the goodness of God in His providence. He then spoke against their idols, and he urged them to repent in view of the fact that God was ruler and judge and there was a coming day of judgment. It was only after this that he mentioned the Resurrection. Presumably, if he had not been interrupted, he would have gone on to say that this Resurrection occurred after Christ’s death on the cross, and he would have expounded God’s grace in the provision of a risen Saviour. But note the order in which Paul developed his argument.

Some expositors say that Paul failed in his approach at Athens, because he did not found a church there. But there were at least six converts from his sermon on Mars Hill and maybe several more, as we read, ‘Howbeit certain men clave unto him, and believed: among the which was Dionysius the Areopagite, and a woman named Damaris, and others with them’ (Acts 17:34). In due course a church was begun at Athens, and the conversion of Dionysius, who was a member of the Areopagus or Supreme Court, was so genuine that he became the leader of it. Eusebius, Bishop of Caesarea, refers to Dionysius as ‘the first Bishop of the Church of Athens’.6 Hardly a failure on Paul’s part, or, for that matter, on the part of the Holy Spirit!

Today the world is very much like that of the Greeks of Paul’s day. In the West, evolution is the predominant belief system and, as a result of this denial of the one true God and rejection of His rules for holy living, the epicurean ideal of hedonism (pleasure seeking) has become the predominant lifestyle. At the same time many people are turning to the Hindu philosophies of the New Age movement or to the occult to fill the spiritual vacuum in their lives caused by their own atheism.

Similarly, most of the countries in which missionary societies work have religions which deny the existence of one holy transcendent Creator and are evolutionary in their beliefs about origins; for example they begin with a belief in pre-existing matter or creatures of some kind. These religions usually involve the placating of evil spirits, or the earning of merit by worship, as in Buddhism, Shintoism, Hinduism, animism, etc., as the Greeks did.

The lesson for preachers and Christian missionaries is clear. God has given us in the book of Acts a pattern of a way to effectively reach people today, which we can follow in our own preaching. Demonstrated to us is the way in which the Apostle Paul adapted his approach and adjusted his method of preaching to best suit the culture of his hearers, both Jews and Gentiles—to begin where they were at. We also see the way in which he used creation evangelism to best penetrate the thinking of the Greeks. Creation evangelism is a tool which works. Our society today, in its evolutionary thinking, ignorance of the one true living God, and preoccupation with sex, is much more like that of the Greeks than that of the Jews. Preachers today can therefore follow this pattern to their own advantage and the advantage of their hearers.

Effective Evangelism in an Evolutionized World 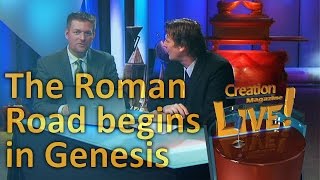