Theologian: Genesis means what it says!

Robert V. McCabe, M.Div., Th.M., Th.D., earned his Th.D. degree at Grace Theological Seminary in 1985 in Old Testament Languages and Literature. He joined the faculty of Detroit Baptist Theological Seminary in 1983 as head of the Old Testament department, and he became Registrar in 1987. One of the OT classes he teaches at DBTS is Biblical Creationism, and he has conducted several seminars on biblical creation in local churches in the Detroit area.

Yôm always refers to a normal literal day when it is used as a singular noun and is not found in a compound grammatical construction.

I first heard about Dr Bob McCabe upon seeing a very thorough defence of a straightforward understanding of Genesis, including in-depth studies of the original Hebrew.1 So I was happy that he consented to be interviewed. The first question was the obvious one: why is Genesis important? Dr McCabe explains:

“Genesis is the foundation for the remaining 65 books of the Bible. It reveals a number of subjects that have an impact on people of all ages: God’s existence; His goodness in creating the heavens, the earth and all things in both over the space of six, consecutive normal days; His direct creation of His divine image bearers, the first human beings Adam and Eve, on Day 6; His appointment of Adam as vice-regent over creation; the Fall of Adam along with the resultant Curse on the created order; the global Flood in Noah’s day; the tower of Babel; and the birth of the Israelite nation.”

But despite this, it’s no secret that many in today’s church deny that Genesis is history. Dr McCabe explains that this has nothing to do with a sound understanding of the Bible, but is due to intimidation because “modern ‘scientific’ opinion with its ‘deep time’ assumption informs us that the earth is billions of years old.” The danger is that “there are two conflicting sources of authority for modern evangelicals: ‘science’ and the Bible.” Indeed, Dr McCabe notes that leading progressive creationist Dr Hugh Ross,2 who believes that the days of Genesis 1 were millions of years long, is a good example. He says that Ross is very up-front that “he views ‘science’ as having an equal level of authority with the Bible,” and even “refers to ‘science’ as the ‘sixty-seventh book’ of the Bible”3 and as “dual” revelation to the Bible.4

So, since Genesis should be authoritative, what does it actually mean? One very common question is, are the days of Creation Week (Genesis 1:1–2:3) normal-length days? Dr McCabe strongly affirms this, giving several reasons:

One of the most fashionable denials of a straightforward understanding of Genesis 1–11 is the ‘Framework Hypothesis’.5 This was explicitly invented so Genesis doesn’t conflict with “science”.6 Dr McCabe has also written a two-part critique of this,7,8 so he is a good one to explain it:

“The framework view asserts that the creation ‘week’ of Genesis 1:1–2:3 is a literary device, a poetic or semi-poetic device, intended to present God’s creative activity in a topical, non-sequential manner, rather than a literal, sequential one.

But scholars including Dr McCabe note that the parallels are forced. E.g. the sun, moon and stars (Day 4) were in the expanse/firmament (Day 2); the sea creatures (Day 5) were to fill the seas (Day 3); while nothing on Day 6 was created for these seas. Furthermore, Dr McCabe points out that the creation account is the same sort of literature as the rest of Genesis, i.e. historical narrative, while it lacks the key features of Hebrew poetry.9 Thus Genesis should be understood as history (see Is Genesis poetry?).

If we either minimize or deny the import of the early chapters of Genesis as literal history, what is to stop us from doing the same with other passages of Scripture, … ?

But still, some in the church claim it’s a side-issue that does no harm. Dr McCabe strongly disagrees:

“Because our world is aggressive in its promotion of the evolutionary model, this unbiblical scheme has influenced the worldview of many in the church. But if we either minimize or deny the import of the early chapters of Genesis as literal history, what is to stop us from doing the same with other passages of Scripture, such as the confusion of the languages at Babel, turning Lot’s wife into a “pillar of salt”, the many miracles performed with Israel’s Exodus from Egypt or Christ taking five loaves and two fish to feed 5000, to name just a few? Furthermore, if the Bible’s history can’t be trusted, then why trust its morality? No wonder that with some who had been part of vibrant churches, evolutionary thinking has led them astray into moral relativism.”

Dr McCabe is especially concerned when “leaders in evangelicalism accept evolution and superimpose it on the biblical record.” He recently heard one argue that Genesis 1–2 does not prohibit evolution, so there is no need to believe in a literal Adam. But then, “was there a single human ancestor whom God actually judged for his disobedience by bringing condemnation to his posterity and a curse to the creation over which he presided (Genesis 3:19, Romans 8:19–2210)?11 If not, what is to stop anyone from denying a literal last Adam (i.e. Christ, 1 Corinthians 15:45)?”

Lastly, none of this would matter to Dr McCabe if he were not a Christian. He became one in 1969, after faithful, patient witnessing by friends which included answering objections, as he explains:

“Prior to my conversion, I had been witnessed to many times in my life and had occasionally thought that I needed to turn to Christ. However, I continued to embrace my sinful lifestyle and tried to keep my distance from Christianity. One night, some friends spent a few hours explaining the Gospel and answering some of my foolish objections. There came a certain point during their Gospel presentation where my eyes were opened in such a way that I repented of my sinfulness and trusted Christ to save me. I am eternally grateful for God’s amazing grace.”

“Creationist materials have a vital role to play in equipping us to be prepared to give a defence for our faith that starts with Genesis 1:1. Since our culture is aggressively hostile to a biblical worldview in every arena, such as our educational system, literature, news media outlets, entertainment, and personal interaction with others, we also need to be pro-active in disseminating biblical creationist material. This is where creationist ministries like yours and other similar ministries have a crucial role to play in the 21st century.”

Thank you too, Bob, for your support and for teaching and defending the truth of biblical creation. 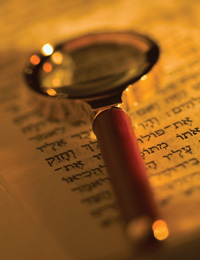 Some use Genesis 2:4, “In the day that God made” to argue that the days of Genesis 1:1–2:3 were not 24-hour days. But Dr McCabe is highly unimpressed, pointing out that they have totally different contexts. More technically, he explains from the Hebrew grammar:

In Genesis 2:4 יוֹם yôm is part of what I can call a grammatically bound construction. To communicate my point, I will provide a literal translation of 2:4: “in-the-day-of-making by the Lord God earth and heaven.” The five hyphenated words in this translation comprise this compound grammatical relationship. These five words involve three closely related words in the Hebrew text: an inseparable preposition (“in,” bə ) immediately attached to “day” (yôm) a construct, singular noun, and an infinitive construct (“making,” ‘āśôt). Elsewhere in the Bible, this compound bə yôm is often a Hebrew idiom for “when”, thus the verse means, “when the Lord God made the earth and heaven.1

There is more flexibility in the meaning of yôm in such bound constructions. Another example is “The day of the Lord”, another compound grammatical construction, more precisely construct-genitive relationship; however, I doubt that “day” in Genesis 2:4 is meant to be taken as a literal day. Its close relationship with its definite genitive, Yahweh, allows for the word to have a more extended use as “time”. Therefore, the use of “day” in Genesis 2:4 is not simply an example of a singular noun but it is part of a bound construction.

Many disbelievers in a historical Genesis 1–11, including Framework proponents, assert that Genesis is poetic. As noted, Dr McCabe rejects this, and explains further:

“If this account were poetry, poetic parallelism would be its dominant feature, as it is in passages such as the creation hymn in Psalm 104, a poetic version of Genesis.”

That is, one line says one thing, and the next says practically the same thing in different words. Or else the next line augments the first, or says the opposite. E.g. verses 10–11:

You make springs gush forth in the valleys;

they flow between the hills;

they give drink to every beast of the field;

the wild donkeys quench their thirst.

“Yet Genesis 1:1–2:3 is nothing like this. Instead, it consistently uses a grammatical device that characterizes historical literature, the waw (or vav) consecutive. This device, which usually moves the narrative forward in sequence (i.e. consecutively) occurs some 2,107 times in Genesis, averaging out to 42 times per chapter. In Genesis 1:1–2:3, while there is an absence of poetic parallelism, there are 55 waw consecutives, starting with וַיֹּאמֶר wayyo’mer (“and … said”), וַיְהִי wayehi (“and there was”), וַיַּרְא wayyar’ (“and … saw”).1 Whatever else may be said about the creation account, this grammatical device marks it as historical narrative, just as it does in the remainder of Genesis. Thus, it is our obligation to interpret the creation account as literal history just like we do the other historical narrative in the Bible.”