Researcher speaks up on pressure to conform

According to Thomas Bouchard, a US psychologist famous for his research on twins raised apart,1 even scientists with good reason to believe that the majority are wrong can be silenced. The reason is the huge pressure to conform, the “powerful human urge to belong inside the group, to think like the majority … and to win the group’s approval by trashing dissenters.”

Bouchard, being interviewed in the journal Science on his retirement,2 cited the example of Larry Summers who resigned as president of Harvard University after an outcry over his saying that discrimination alone doesn’t account for women’s lower representation in math-based disciplines.

“Nowadays, I’m sure there are people who are not publishing stuff on sex differences,” Bouchard says, adding that he sees self-censorship as a “great danger”, where data is not published because it does not fit the prevailing belief system. (See also Science journal editor admits: Peer review censors against-the-trend papers.) “I talk about those things in my class all the time—that males and females have different interests; … in a sense, females have a broader and richer view of life. There are a lot of people who simply won’t talk about those things. Academics, like teenagers, sometimes don’t have any sense regarding the degree to which they are conformists.” (Emphasis added.)

Academics, like teenagers, sometimes don’t have any sense regarding the degree to which they are conformists.—Thomas Bouchard, University of Minnesota, renowned for his psychological studies of twins reared apart.

A New York Times article about Bouchard’s views cited the case of economist Robert Shiller, an expert on house prices.3 While an advisor to the US Federal Reserve, he became deeply concerned about the bubbles developing in the US housing and stock markets. But rather than shout from the rooftops in warning the Fed, he expressed his views “very gently”. He said he “felt vulnerable”, because deviating too far from consensus “leaves one feeling potentially ostracized from the group, with the risk that one may be terminated.”

The New York Times article goes on to say that “conformity and group-think are attitudes of particular danger in science … because progress often depends on overturning established wisdom”. Bouchard was not suggesting that forming a consensus view was wrong, but the problem lay in the peer-pressure silencing of critics, saying that his field has “whole domains we can’t talk about”. The NY Times article says that if “the brightest minds on Wall Street got suckered by group-think into believing house prices would never fall”, who knows about such bandwagons as global warming, saying sarcastically, “You mean it might be harder to model climate change 20 years ahead than house prices 5 years ahead? Surely not—how could so many climatologists be wrong?”

People often ask us, “How could so many scientists be wrong” about evolution? Easy! See Herd rule—Standing for truth can be painful in a world in rebellion to its Maker. 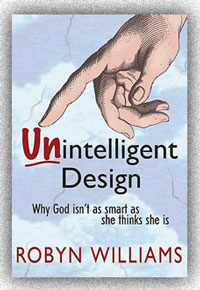 Presenter of The Science Show, Robyn Williams, is a well-known atheist and stridently anti-creationist. He was declared the Australian Humanist of the Year in 1993 and is the author of Unintelligent Design—Why God isn’t as smart as she thinks she is. (Publishers: Allen and Unwin, Crows Nest, NSW, Australia, 2006.)

Robyn Williams: Of course you’ve got a tremendous overview of the published papers, not only in your own journal but in other journals. Out of 1,000 papers on climate change, how many can you remember that go against the trend? Any?

Bruce Alberts: Well, I get lots of complaints from people who want to publish papers saying climate change doesn’t exist, but they have a hard time getting their papers published because they don’t pass peer review. So there are actually very few papers that get published in the peer review literature that seriously challenge in any way the basic hypothesis. As in evolution (we’re at a meeting on evolution right now), there are always things you don’t understand, and the creationists use those things you don’t understand, the ‘missing links’, to challenge the whole idea of evolution. In the same way some people use the few things we don’t understand (we never understand everything) to challenge the whole idea of climate change. It’s not a valid way of talking about science.4

Interesting that against-the-trend papers on anthropogenic global warming are treated with the same disdain as papers critical of evolution. And note that Bruce Alberts’ final sentence above attempts to define against-the trend papers as “unscientific”, thus with one fell swoop removing them from scientific discourse. See “It’s not science”.