During one night of preaching in a street mall in my home town [Ed: See Russell Wallace’s earlier article Street preacher says creation is the issue], a young man stopped and began to yell obscenities about Jesus and the Bible.

We often hear flowery feedback from those wanting to ‘compliment’ us on the message of God’s law and the Gospel, and in my opinion this heckler must have just finished reading the latest edition of ‘gutter-speak’.

However, experienced street preachers also have a collection of useful things to say concerning origins, all quite legitimate, to stimulate the thinking of those walking by. These creation ‘soundbites’ grab peoples’ attention because most interpret them as an attack on the ‘facts’ of science.

In my opinion this heckler must have just finished reading the latest edition of ‘gutter-speak’.

When witnessing, I also recommend having some literature ready as an aid for explanation or give away. Creation magazine is the best tool for discussion—the graphics are a very effective help for illustrating your answer.

In addition, my shirt pocket has half a dozen CMI web cards that can be presented on the spot without interruption.

My heckler continued yelling, but then changed tack with the following question, ‘How can matter have a beginning if matter has always been here?’ A good question, considering his earlier expletives, and which I was able to answer quite simply (see the article If God created the universe, then who created God?). My answer prompted more questions.

I have noticed that when God and the Bible are introduced to the conversation, some hearers liven up and will reply with mockery and sarcasm: ‘What! How can you believe that book? Anyone can put words together into a bunch of stories to delude their followers.’ My response to this has been: ‘Yes. I know of at least two books written that way, the book of Mormon1 and the Origin of Species.’ I could have said (as many do): ‘Don’t worry about the inconsistencies, just believe in Jesus’, but such an attempted fob-off only confuses people’s thinking about Christianity.

By now my heckler had shifted gear from emotionally-charged statements to sensible questions. His buddy had not said anything for some time, but broke his silence with: ‘Dinosaurs are not in the Bible and ‘carbon dating shows the earth is much older than the Biblical age.’ Here’s the key. My preaching turned into answering questions that did not focus on sin or the resurrection, but on Genesis and the trustworthiness of the Bible. Questions are an opportunity to show people that we have a reasonable faith and that the Bible (the very thing they were mocking) actually connects with the real world. Then another man joined in, exhibiting irritation at hearing someone respectfully trashing evolution.

Please note readers: The creation/ evolution issue is NOT a side issue! It cannot be given that people are asking us questions about it! When you attack the claims of a belief system, adherents understandably can get angry. People know that if evolution is true, it can be used to justify any lifestyle, because ultimately there is no accountability for doing the wrong thing. If we are just the result of chance random process over millions of years, i.e. purposeless chemical processes, then how can one determine what is right and wrong?

In contrast, we are not an accident, but rather God’s workmanship (Ephesians 2:10). This means that God made us, therefore He owns us, which means we are here to serve Him—isn’t that what the ‘first and greatest commandment’ (Matthew 22:36–39) is all about? We are here for a purpose! This fits with the observable evidence in the world today that points to things having been designed (Romans 1:20). Purposeful design from a pre-existing intelligence/designer, as described in the book of Genesis, is the only thing that makes sense. We have moral laws—i.e., ‘right and wrong’—because we were created by, and are therefore accountable to, a moral law-Giver.

The next time you are sharing your faith with a non-Christian friend, ask them how chemistry determines right and wrong. I have heard the circular reasoning by people who say right and wrong are evolutionary constructs written by man to manage the collective behavior of society. This is only another way of saying, ‘man determines truth’. In echoing the words of Satan when he said ‘Did God really say … ?’, today’s culture has swallowed fables and reasoning that underscore the entrenched constructs of evolution that pervade our schools, universities and Bible colleges that promote a very liberal view of Scripture. A belief system with little substance has for the last 150 years led millions away from the truth.

During another evening of witnessing, I conversed with a couple who were on their way to a protest meeting against Scientology. They were evolutionists and objected to all forms of religious belief, except their own. After some discussion, my comments were met with scoffing remarks that God was the ‘pink-eyed spaghetti monster’ among other things. So I said: ‘Did you know that there is no evidence for evolution.’ Straight away they came back: ‘What? Look at the fossil record!’ When statements about evolution are given this way, I normally respond with: ‘Well, what about the fossil record?’ It is a good strategy in one-to-one evangelism to give people a chance to speak what they believe because it encourages them to discuss the issue. In my answer, I quoted Dr Colin Patterson on the absence of transitional forms in the fossil record—a very handy quote to remember, also found in The Revised Quote Book which says:

My comments were met with scoffing remarks that God was the ‘pink-eyed spaghetti monster’.

‘Dr Colin Patterson, Senior Paleontologist at the British Museum of Natural History wrote a book on evolution. He was asked why he did not include any information about intermediate forms. He responded:

‘“I fully agree with your comments on the lack of direct illustration of evolutionary transitions in my book. … I will lay it on the line—there is not one such fossil for which one could make a watertight argument.”’

Our conversation continued like this: (My words in green).

‘Well that’s just one man’s opinion. There are thousands of scientists who have proven evolution in the fossil record … .’

‘Well, when you need to have the brakes repaired, where do you take it?’

“So you would take it to a mechanic who is trained and skilled in repairing automotive brakes.’

’How many skilled mechanics are you going to listen to before you believe what they say about your brakes?’

’That’s right, because you trust one man’s opinion and experience. Dr Colin Patterson was a fossil expert and a leader in his field, and Head of Department at probably the world’s leading natural sciences museum. Wouldn’t it be foolish to ignore the advice of an expert, as well as the evidence?’

This window of conversation is a common response when using the Colin Patterson quote. Some people simply refuse to see the logic.

Further along in our discussion, the young man mentioned his concern about global warming . This is currently very popular, however, it is better to keep the conversation at the foundational level, rather than be side-tracked away from the topic. As he and his friend turned to leave, he asked: what about the dinosaurs? He said this in a fashion that sounded more like a statement than a question. Young people say things this way because, apart from the urge to ‘win the debate’, they have been told over and over again the ‘facts’ of evolution. It was a pity he had to leave, we were just getting into it. When people are in a hurry, a web card is the best thing to hand over. Because if they are truly interested in obtaining answers to their questions/objections, Creation.com is a great place to find them.

Creation Evangelism in an Islam-Aware World
US $10.00
DVD 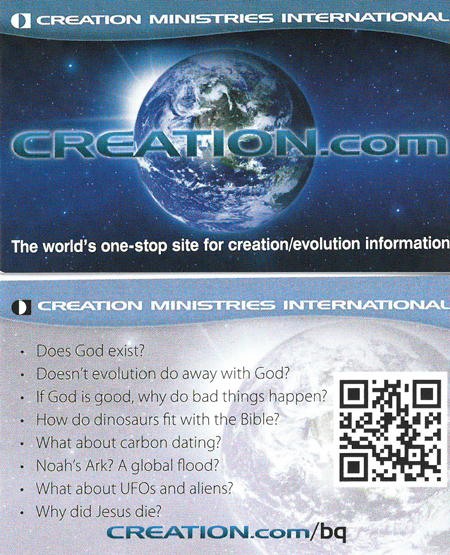 Creation: The Key to Dynamic Witnessing
US $10.00
DVD

Creation Evangelism in an Islam-Aware World
US $5.00
MP4 Video